The evolution of Mannarasala as the supreme place of worship of the serpent Gods is associated with Parasurama, the son of Jamadagini and a descendant of Bhrigu. When Parasurama decided to seek atonement from the sin of killing the Kshatriyas, he approached the holy Rishis. They suggested that he should make a gift of a land of his own to the Brahmins. Parasurama propitiated Varuna Deva (the Lord of the Seas) to get some land for himself. Varuna appeared before and advised him to throw his parasu, the axe which Lord Siva had given him, into the sea to reclaim land. He throws it and raises a piece of land from the sea and gives it as a gift to the Brahmins. This land is believed to be the present-day Kerala.

In the beginning Kerala was not habitable because of the salinity. Not even vegetables grew there. People began to leave the place. Parasurama was pained at this. He undertook penance to please Lord Siva, who advised him that the objective could be realized only if the flaming poison of the serpents was spread everywhere and that the only means of doing that was the worship of Nagaraja. Parasurama, a yogi, firm of will and above all desire, decided that he would take no rest until he saw Kerala come up as a land of evergreen beauty full of trees and plants, prosperous in every way. He set out with his disciples in search of a deserted jungle in order to please Nagaraja who was inaccessible and beyond anybody's understanding. He found a suitable place near the seashore in the southern part of Kerala. Satisfied with having found a proper place for the realization of his cherished dream, the great Rishi constructed a Thirthasthala for the performance of penance

Nagaraja, who was pleased with the penance, appeared before Parasurama, willing to grant him his desire. Parasurama prostrated at the lotus feet of Nagaraja and prayed to realize his objective. Nagaraja granted his request with great pleasure. Ferocious serpents arrived at the spot at once to spread the flaming Kalakuda poison. Because of the percolation of poison, the land of Kerala was desalinated, to become habitable with greenery. Parasurama then requested the Lord to bless the land forever with his eternal presence, and that was also accepted by the kindly-disposed Nagaraja.

The consecration of Nagaraja

At a very auspicious moment, Parasurama installed, according to Vedic rites, Nagaraja, who is Brahma, Vishnu and Siva in one in the 'Thirthasthala' (Hall of pilgrimage) surrounded by Mandara trees, the place then known as Mandarasala. The installed deity here represents Anantha (Vishnuswaroopa) and Vasuki (Siva in spirit). The installations of Sarpayakshi, Nagayakshi and Nagachamundi, the Naga deities, as well as of their associates were conducted in the proper places with the proper rituals. Parasurama performed to the accompaniment of Vedic recitation and singing of Sama, Abhishekam, Alankaram, Neivedyasamarpanam, Neeranjanam, Sarpabali and other rites pleasing to the serpents and thereby made all the serpents happy. Parasurama brought learned people from other regions; installed Durga and other deities in different places; appointed Brahmins who were Tantric experts for performing poojas; nominated Kshatriyas, peasants and the Ashtavaidyas who were supreme among the physicians. After giving important instructions to be followed to preserve the sanctity of the place, Parasurama left to do tapas on Mahendra mountains.

Many generations ago after Parasurama left to Mahendra mountains, the Brahmin family who was left to caretake fell into the grief of childlessness. Vasudeva and Sreedevi were the sad couple who had to bear that heavy load of sorrow, who resolutely worshipped Nagaraja to allay their grief. It was about this time that unexpectedly fire broke out in the jungle around the dwelling place of Nagaraja and burnt down the jungle. The serpents were tortured by the flames, forcing them to hide in their pits with great difficulty. Vasudeva and Sreedevi looked after the serpents, who had their hoods charred, bodies half-burnt, and fainting from time to time, falling down and crawling along. They gently fanned them with fans made of sweet-scented grass and poured ghee mixed with honey and oil on the wounds; cooled their melted bodies with sandalwood ointment; and comforted them. They put them at the foot of banyan trees. They performed purification ceremonies and consecrated the pits; and were put up in special places under the shade of deodar trees and in Chitrakudas. The couple performed abhisheka with Panchagavya (a holy mixture of five items from the cow's milk, curd, butter, urine and dung); observed elaborate poojas according to rules with areca nut flower bunches, fragrant flowers and water, incense etc., Nivedyam with melted butter (ghee), milk, payasam with molasses, rice powder, turmeric powder, coconut juice, Kadali fruit, cow's milk, all mixed together in the proper form as Nurum Palum, equivalent to the elixir of life. They offered serpent deities with great devotion, appam, aval (beaten rice or rice wafers), tender coconut etc. They chanted vedic mantras, performed circumambulation and performed all kinds of poojas to restore those crowds of serpents to full health. The omnipresent and omnipotent Nagaraja was greatly pleased with their continuous penance and the love shown to his associates; Nagaraja made himself visible to the couple and blessed them that he would incarnate on the earth as their beloved son. He said " I shall assume the form of a serpent and stay here (in Mannarasala) permanently, as long as the sun and the moon are there, showering prosperity on your family and granting protection to all the devotees who come here …". Thus Mandarasala, the place filled with Mandara trees, the holy spot where the serpents got shelter, where the earth was fully cooled, became Mannarasala (mann: Earth, ariya: cool, sala: place). 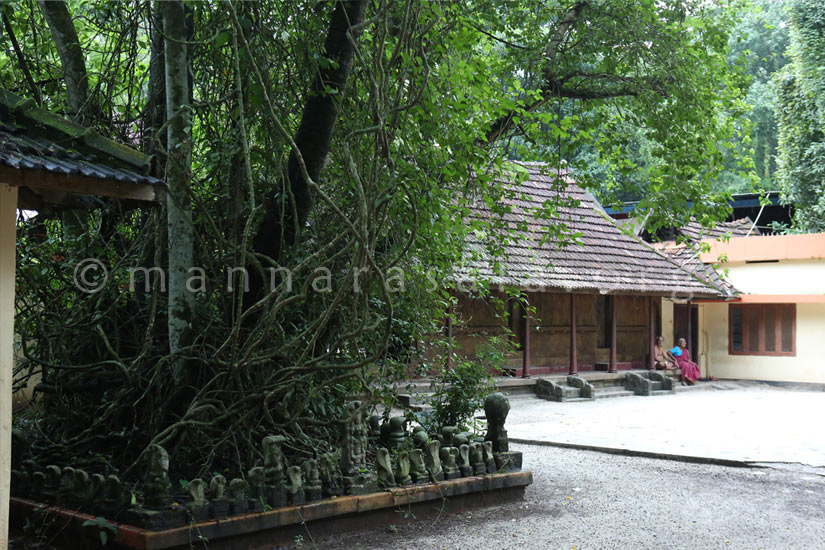 In due time Nagaraja’s boon came true, and Vasudeva and Sreedevi were blessed with two children. Sreedevi gave birth to five-hooded serpent-child, an incarnation of Nagaraja himself and a human child. The two brothers grew up together. Initiation ceremonies and Vedic education were carried out at the proper time in the traditional style. Nagaraja instructed the younger brother to enter into matrimony for the perpetual reservation of the holy family and he obeyed it. When Nagaraja realized that the objectives of his incarnation were realized, he informed his Mother that henceforth he would live at this Illom by entering into Samadhi to bless the devotees. Then he suggested certain inviolable rituals and rules for offering worship and then went into the immaculate cellar, Nilavara and vanished. It is believed that even today that five-hooded Nagaraja stays in the cellar doing Tapas for the abound prosperity of his dependents. The members of the household always refer to him with great respect and devotion as "Muthassan' (Grand father). The jungle close by is the exclusive preserve for his unobstructed peregrinations (Appoppan Kavu - Grandfathers' Grove). 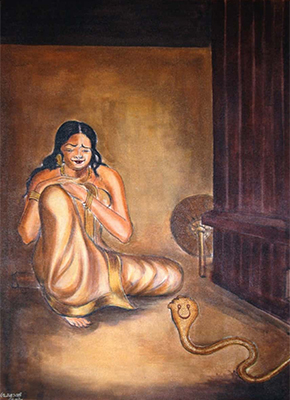 The beliefs and rituals associated with the Mannarasala temple are different from most other temples, and this is one rare temple where the pooja pattern is headed by a Brahmin lady. Legends say that when Nagaraja reincarnated and born to the then Mother of the Illom and left to Nilavara, he had given certain rights and instructions to his mother. He instructed, “Mother herself must offer me worship”. On certain special days men may be given a chance to worship. After Mother's time, the senior-most Brahmin lady in the family will have the status of the Mother. From that time the mother assumes this high position, Mother should live as a Brahmacharini and observe penance. Thus being the ‘Mother’ of the Lord himself, Mannarasala Amma became the mother of the land. She is popularly referred as Valiya Amma. Being the heart and soul of Mannarasala, pilgrims cannot leave Mannarasala without seeing that fascinating divine glow with their own eyes. Faithful devotees who come here to seek the blessings of Nagaraja, wait patiently to have a glimpse of Valiya Amma, and seek her blessings and advice to lead a prosperous life. That resplendent brightness of Valiya Amma who has turned into a symbol of Naga deities through fasting and other austerities, and performing rituals and poojas, sheds brilliant light on the temple and the environment, and endows it with heavenly glory.

Valiya Amma has a special pattern of pooja every day, and she must perform pooja in the sanctum sanctorum itself on certain days like

When the earthly life of a Valiya Amma ends, the ceremony of cremation is different from that of other family members. The holy earthly body of Valiya Amma is placed in the four- chambered house of the Illom. (The 'Samadhi' itself will be in the southern hall of the four- chambered building). The cremation is held in a particular place between the temple and the Illom. During these days, only milk and fruit (Palum Pazhavum) will be offered in the temple. After offering nivedyam, the door will be closed immediately and will be opened the next day; on that day also it will be closed as on the day before. The mourning goes on like this for three days. 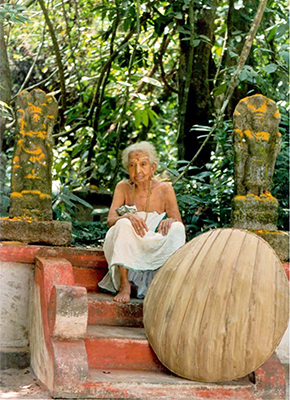 The former Valiya Amma, Savitri Antharjanam was born on Anizham star in the month of Tulam 1079, and her wedding was on 18th of Chingam 1092. She assumed the position of Valiya Amma on 28th Tulam 1093 and started Nagaraja pooja on 23rd Makaram 1094. Her Satabhishekam (Celebrations for completing 80 years of age) was celebrated with great pomp and splendour on 4th November 1986). When she attained Samadhi, numerous leaders and prominent personalities from different walks of life had flowed to Mannarasala to pay homage to that great spiritual hermitess, who had blessed the devotees and spread the divine radiance for many decades.
Valiya Amma attained Samadhi on 24th October 1993 at the age of 91. After completing close to eight decades as Valiya Amma. 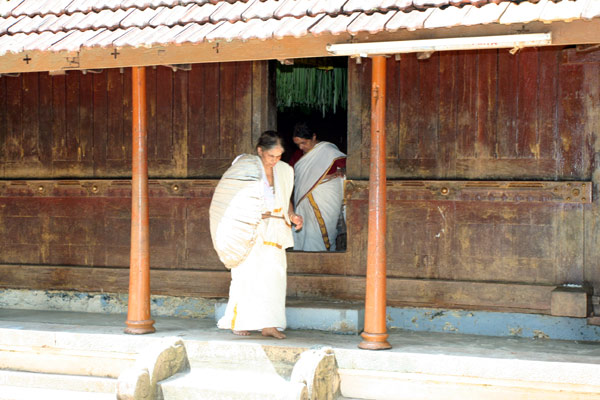 Valiya Amma of today is Uma Devi Antharjanam, and she was consecrated as the Valiya Amma on 24th October 1993 at the age of 64. She is also the wife of the late Shri. M G Narayanan Namboothiri.

Nurum Palum is an important pooja done as a remedy for various kinds of sarpa doshas, Rahu Dosha, Kala Sarpa Yoga, etc. Nurum Palum begins from Kanni Ayilyam and is performed till the middle of Edavam month (last week of May).

Sarpabali is the most important pooja for pleasing serpent Gods. Sarpabali includes offering Nurum Palum for all serpent gods in addition to Sree Nagaraja and Sarpayakshiamma. It also includes Guruthi pooja for Nagachamundiamma and Nagayakshiamma.

Tulabharam is an offering made to Sree Nagaraja for fulfilling one’s wish, well-being, prosperity and long healthy life. The offering can be any commodity (usually banana, jaggery, milk etc.) which weighs more than one’s bodyweight as measured in the balance kept in front of Sree Nagaraja.

Uruli Kamazhthu is an important offering to Sree Nagaraja and Sarpayakshiamma, done by married couples to be blessed with children (for ‘Santhana labdhi’).

Sarpa Pratima Nadakkeveppu is an offering made with utmost devotion and prayer to Sree Nagaraja and Sarpayakshiamma for redemption from sarpadoshas.

Mannarasala Amma is the supreme priestess of the Mannarasala Temple. She is the mother of Sree Nagaraja. She performs all the major poojas on the auspicious days of Ayilyam and Maha Sivarathri.

Nagachamundiamma is the sister of Sree Nagaraja. Poojas are offered to her by Mannarasala Amma as part of her daily thevaram, and on Ayilyam days.

Special poojas are offered on the day of Ayilyam in the temple and at Illom known as Ayilyam Pooja. The world-renowned Mannarasala Ayilyam is celebrated in the month of Thulam. Ayilyam is also celebrated with the same befitting grandeur in the months of Kanni and Kumbham.

Nagayakshiamma is also a consort of Sree Nagaraja. Poojas are offered to her by Mannarasala Amma as part of her daily thevaram, and on Ayilyam days.

Mahasivaratri is a very important day at Mannarasala. The consecration of Sree Nagaraja is in accordance with the concept of Siva. The poojas also are on the Saivite model. Thus, Sivaratri assumed special importance among the annual festivities.